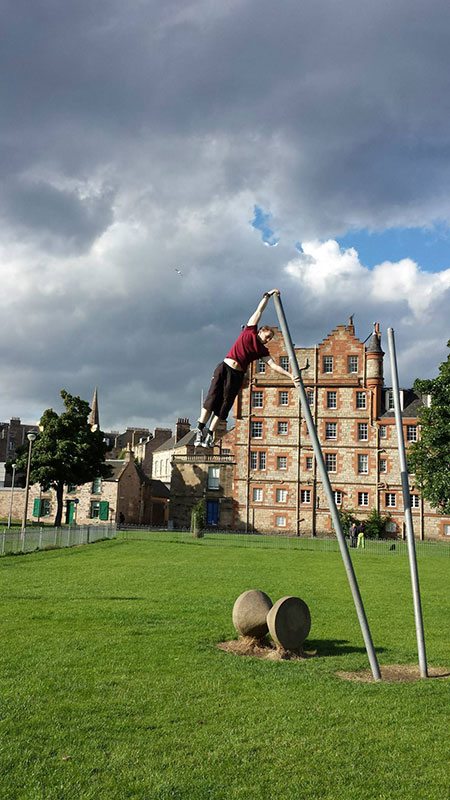 Urban Pole – What is this new concept?  Danny Charge of Edinburgh devised a new idea for the pole dancing community.  The origin was a facebook post from Brazil which inspired a brand new form of pole dance which consisted of a group of pole artists performing pole tricks, using the facilities in the urban environment as a annual event.

So, where did Danny go with this?  On the 3rd August, Edinburgh hosted the UK’s first of the annual Urban Pole Fest in the Meadows.  The location was perfect due to its vast open area with a play ground, trees, park benches to mention but a few of the diverse apparatus which could be used to perform pole related tricks on…thus calling the new craze ‘Urban Pole’.

Urban Pole is the fusion of Parkour and Pole Dancing which means that the freedom and possibilities are endless to inspire creativity to a already growing community of polers  and non-polers.  It also gave an opportunity for those who have never seen pole to get involved and see it for the fitness and finesse that until now has not been given the platform to show the general public.

A bespoke 5 man pole was erected which encouraged those of all ages to get involved as there was a group feel about the event which is difficult to achieve on a solo pole.  As the structure was made with horizontal and vertical poles it gave dimension to the tricks which could be performed, drawing closer to an acrobatic theme, showing again that pole has so much more to offer in the dance, fitness and performance industries.

Urban Pole allows so much more freedom of expression as the environment has so much more diveristy, not only the equipment readily available such as a street lamp but also the weather.  As Scotland is renowned for its unpredictable climate, it challenges the most hardened of souls to work with new challenges.  It takes more strength and agility to adapt to the environment which in any gym or dance studio is a consistent element.  This only heightens the enjoyment of ‘sweating in the rain’.

So, is Urban Pole the way forward?  Why not?  It is the most logical progression to an industry which promotes confidence, by taking the pole outside you are showing others the benefits too, those whom would not necessarily have thought of pole dancing as a form of getting fit.

The Urban Pole Festival, 3rd August 2013 was an all day event from 11 am – 4 pm.  It comprised of various schools from Scotland, Tenerife and Australia who came together and initially jammed on the 5 man pole as this was the meeting point and the début of the newly designed structure, specific for pole dancing outdoors.  The purpose of the pole was to encourage as many dancers as possible to gain confidence to practice moves in the outdoor environment and also to draw public attention.  Once everyone was warmed up they then proceeded to find other apparatus in the local area to attempt moves and shapes which would normally be performed on a pole indoors.  Also, later taken to the Royal Mile where it gathered crowds who were there for the Edinburgh Fringe Festival already susceptible to street performances.  Gates, statues and scaffolding were all used as part of the groups creativity.

For more information on when the next Urban Pole Jams around the UK – www.facebook.com/urbanpoleuk

For more information on purchasing or hiring the 5 man pole – www.goeswell.co.uk or Anne Goswell