The All Ireland Pole Dancing Competition 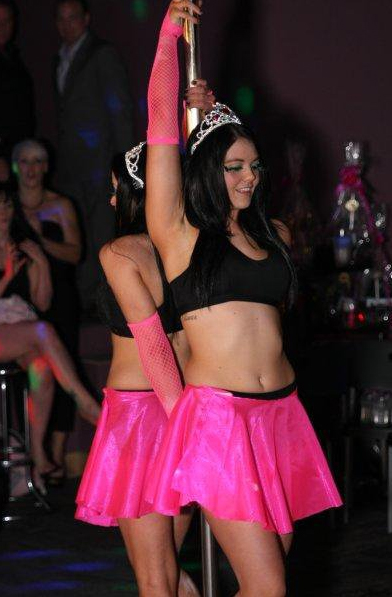 Katherine White from Dublin is the winner of The All Ireland Pole Dance 2011 Competition. The competition was hosted by Polercise on Friday 3rd June 2011 at the Precious Odyssey Pavilion, Ireland.

Doors opened at 7pm to all the contestants’ friends and families with many pole dancing supporters alike. The evening kicked off with an opening act from four of the Polercise pole dancing instructors, which then lead straight into the first half of the competition with the doubles section. Friends Yasmin and Leona scooped the winning title and each performed a five minute routine choreographed by themselves and they also demonstrated the sheer skill, strength and technical ability required to compete in and earn a final place in competitive pole dancing today.

This year was the first time that the competition had male entries and the male winner was Nicky Walsh from Co. Down, whose desire to compete at international level will now become a reality, as he will be the first male to represent Ireland at the World’s Preliminary Heats later this year alongside Katherine, Yasmin and Leona.

Organiser of the Competition El Fegan from Hilltown, founder of Polercise Ltd, works continuously to promote pole dance as a form of exercise and strip its sleazy image.

This competition was a great opportunity to celebrate some of the talent that has been created over the past few years in Ireland and to not only change the public’s opinion of pole dancing, but also get more people involved and to discover that fitness can be fun as well as good for your health.

Competitions within the pole dance world are really heating up and standards are extremely high, with lots of girls coming through with different backgrounds in dance and gymnastics. Competitions not only seek out the best pole dancers, but are a great way to promote pole dancing to spectators at the events and hopefully inspire many more people to take the plunge and find out what the fascination is.

The proceeds from this year’s competition mounted to the sum of £2,395 and will go towards The Pole Sport Benevolent Fund through El’s participation in the pole to peak challenge.