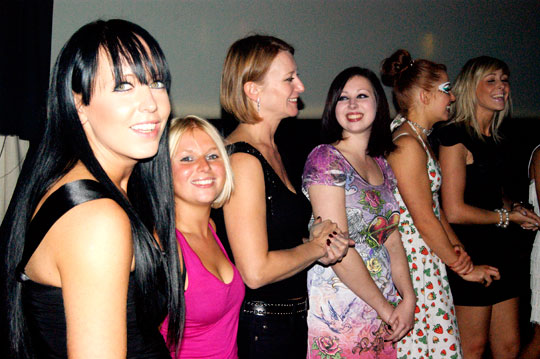 The competitions were The European Pole Dance Champion 2010 and The British Isles Pole Dance Champion 2010. Hundreds of spectators each night attended the 2 day event and crowded into The Civic Hall at Grays in Essex. They came from around Europe and the UK and were not disappointed with the double back-to-back pole dancing competition. Spectators were able to see all their favourite pole dancers under one roof.

Many top name pole dancers attended from the pole dance industry to battle it out to for the top titles and amazing prizes, such as the likes of Sally-Ann Giles from the UK and Hanka  Venselaar from Holland. One of the prizes was a one week stay in the USA to join one of the OC Pole Fitness Instructor Training Course held by World Champion Felix Cane. There was also a holiday to Turkey for six, photos shoots, free venues for holding workshops and many more prizes, making the 2 competitions the biggest giveaway prizes in the UK.

The 2010 European Champion was the first competition ever to have been held in the UK and the second year for running The British Isles competition. The organizers and promoters of the 2 competitions were Pole2Pole Magazine. Before anyone had even attended the two events they were the most talked-about pole dance competitions in the industry – everyone was excited about what the events were going to be like and how many fantastic names were going to be performing at them. Ticket only cost £20 for each competition. This was a very reasonable ticket price and it is well-know within the pole dance industry that Pole2Pole Magazine are the most fair pricing promoter within the industry.  Anyone who was looking forward to seeing these amazing pole dancing competitions was not let down and they were able to see the best of the best pole dancers performing each night. The industry knows that if you want to see the best pole dancing competitions, you need to come to Essex!

Essex is the only county that holds more pole dancing competitions each year than anywhere else in the UK. You’re never entirely sure what to expect with any pole dance event beforehand, apart from looking forward to seeing the performances. Therefore, here is just a little bit of the feedback from some spectators of the 2 amazing competitions of last October:

Fay W, from the north of the UK: “The strongest impression of the two events that overrides the entire amazing pole dancing, is the incredible and fantastic organisation.”

Stacy P, from the South-East of the UK: “Of all the pole dancing events that are around, these were two of the best that I have ever been to.”

Sam R, from the West of the UK: “The venue layout was fantastic; the spectators were looked after so well and the 2 competitions started on time and ran like clockwork.”

Each night the competition was opened with a fantastic and lovely pole dance performance from Elaner Gibson and Lisa. Their facial expressions and being dressed as two clowns went so well with their performance and it was a dream to watch. The amateur category began straight after the opening performance; it was quite varied in ability but all performances were unique to watch, which was also helped along by the competition organisation, the sound and lighting. The MC over the 2 nights was Robbie Valentine and very special thanks go out to Robbie for the two nights that he was in total control of. Robbie was able to handle his task very well and he frequently made the audience smile and remembered every one of the European pole dancer’s names. He was in regular contact with the judges and made sure they had plenty of time to confer before he asked the next contestant to come on stage.

This was also due to the fantastic organisation between the two competition managers, Annette Savill and Hannah Savill, as they held all performances together and made competitors feel at home. They took care of the organisation backstage along with the sound and lighting team owner Mr Doug Hunt, whose overwhelming light display and top sound made the evenings look and sound wonderful.

Doug Hunt set out the staging for the 2 Alistage 14 feet poles, which were set up just right for all the dancers and they worked and looked fantastic. There was not one complaint from any of the contestants. The contestants even let the organizers know the poles were not slippery and were thoroughly cleaned each time between five pole cleaners and in addition, that the stage set-up was faultless. There was one 14foot spinning pole and one 14foot static pole and the spinning pole span like a spinning top, so smoothly.

As the dancers started to arrive at the venue, they needed to book themselves into the competitions and were amazed to find out that they were able to choose which colour background lighting they wished to have to perform to, so that it would mach their outfits. The organizers were very happy to be told by all the contestants that they have never been asked which colour background lighting they would like, and they know of not one other pole dancing competition who have offered this. This is what separates Pole2Pole as organizers from any other pole dancing organizer.

The supporting audience from Europe and the UK were very respectful all evening and after the first 20 minute break, the professional category then followed and once more throughout this category, the competition got better and better with delightful performances and more use of the spinning pole.

The audience loved every minute and throughout each category, they were continuously applauding with each performance.

The climax of each night was the Champion of Champion’s categories. This is where the best of the best pole dancers battle it out for the biggest titles. This category was performed at around 10.30pm.

Everyone on stage at this point was in a dream world and photos were being taken all around them, plus the complete 2 evenings of competitions were filmed.

On the Saturday night an after-party at Colors Nightclub in Basildon was arranged by the organizers. A large number of people then left for the party which started from 12 midnight and went on until the early hours.

Everything over the 2 competition nights was positive and the judging was done by pole dancers. All the competitors did amazingly and the results of the fantastic running, efforts, organisation and the presentation were the best that any pole dancing organizer or promoter could wish for.

The 2 competitions were filmed and all the performance footage has been made available on 2 DVDs which has all been made professionally. Each DVD displays all the amazing pole dancers and hopefully also shows the general public that pole dancing in Europe and the UK represent this as a fitness sport.

Some people have a critical eye towards pole dancing and any organisation that tries to take on this kind of competition needs to make the competitions be seen as a very professional and fantastic sport. This must be presented from the entire pole dance industry, just as the 2 competitions that were organized by Pole2Pole Magazine, as Pole2Pole are just one organizer which is part of the back bone of this industry.

Most of the pole dance industry says that Pole2Pole Magazine is the voice of pole dance around the world, plus it is the first and only pole dance fitness magazine in the world.

“It’s just amazing that they’ve set themselves up to represent the pole dance industry worldwide. We seriously deserve them and we hope they will carry on this good work for a long time to come.”