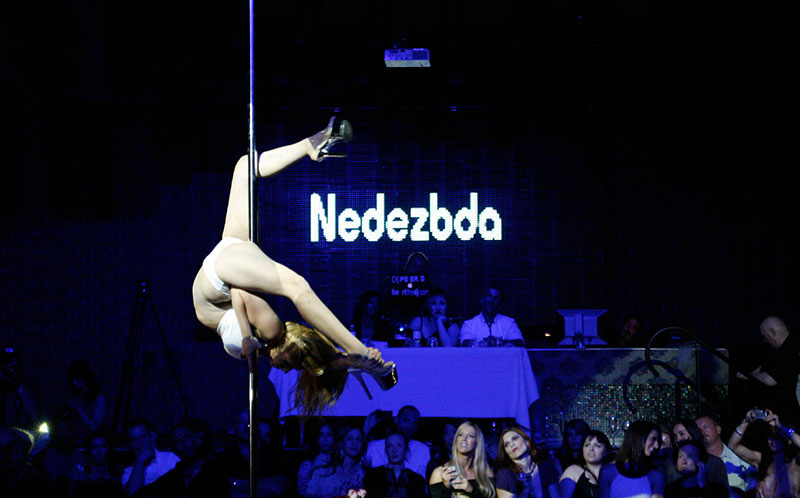 The Pole2Pole Cup USA competition turned out to be a competition to remember. Keith Scheinberg of Platinum Stages called it “the most well-organized pole dancing competition in the country”. There were a total of 22 competitors entered in the competition and not only were they allamazing, they also made the competition so much fun to watch.

Starting off the competition was Ashley Popoli, winner of the amateur category. Ashley did a wonderful job – she was not allowed to let her head drop below her backside in her category. Her routine was original and set the bar for the amateur category. Rhiannan Nichole was amazing, keeping both feet pointed when climbing the pole. Gretta Pontarelli from Pole Kraze studio received a standing ovation: the 61-year-old, with so much passion for pole dancing was felt throughout the entire venue as she performed her routine on stage. Gretta was not placed, but performed by far the most moving performance of the night.

All the contestants worked very hard over the months leading up to the Pole2Pole Cup USA competition and travelled from the four corners of the USA. But all their efforts were made worthwhile with the fantastic prizes rewarded which were worth thousands of dollars.

Prizes for the Professional winner included a glass trophy, a gold sash, a silver medal and one week at the Summer Pole Camp 2012 in St. Maarten in the Caribbean worth £863.59 the chance to grace the front cover of Pole2Pole Magazine and a 2 page story plus a 2 page pull-out photo.

Prizes for the Champion of Champions winner included a glass trophy, a gold sash, a gold medal, one week at Summer Pole Camp 2012 in St. M£791.07aarten in the Caribbeanworth plus 10 hours of pole trainingwith the world’s best pole dancing instructors worth £2,966.52the chance to grace the front cover of Pole2Pole Magazine and a 2 page story plus a 2 page pull-out photo. Over worth of prizes were handed out on the night by the organizers of the Pole2Pole USA Cup 2012 competition.

With the competition being such a big success, the organizers would like to say a big thank you to everyone that was involved – the sponsors, Avec Night Club (with its beautiful stage that looked amazing and was given a raving review by all the competitors on the night) and a special thank you to Platinum Stages USA. Everyone at Pole2Pole, with the support given by Platinum Stages, made the Pole2Pole USA Cup 2012 one competition to remember.