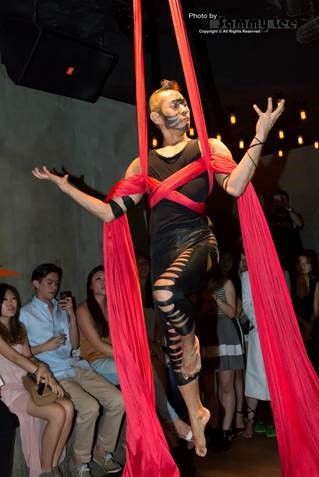 This has been an eventful performance year for Pole Paradise Studio (Hong Kong). We were asked by the very popular bar Solas and PPS agreed to make Solas our resident showcase home away from studio. Improvements were made in the bar to increase the viewing pleasure for our audience. A better spot lighting system to highlight each performance and extra ceiling points installed for more aerial performance areas.

The first show this year was called “The Rockabilly Pin-Up Show” which was a throw back to the pin-up models of the 50’s and the birth of the “rockabilly” look. The crowd was not disappointed and in fact a brand new piece of aerial equipment was introduced to Hong Kong for the very first time in the form of an aerial cube. Hair sponsors for this event came from Amiko Hair Bar who did a wonderful job transforming the instructors and students into dolls of a by gone era.

Later in the year Pole Paradise Studio hosted another showcase called “Apocolytpica”. The idea behind this theme was to actually present a storyline of how the world comes to an end due to war and disease. All caused by government collapse and corporate takeovers. Each act had a specific part to play in the story line from how the world comes to an end, how only a few lucky souls survive, angels of death coming to cleanse the earth and how finally those who survive come together to carry on anew.

The audience was impressed with this new concept of a story line behind the showcase. It’s something more than just act after act being introduced by an MC. Who knows? This may be the direction that most of our future showcases will go.

The amazing team at Hollywood Hair headed by Rennie Fensham and her daughter Yentl sponsored the event’s hair and make up. Special mention goes out to Kiki who did the skull faces on PPS owner Symone and her performing husband Jose.

PPS is now hard at work organizing the 5th and biggest event of the year in Hong Kong, The PPS Aerial Performance Tournament. This year the tournament is hosting 40 contestants from all around the world to compete on pole, hoop and silks. Winners of these categories will get automatic finalist entries for many countries also hosting similar competitions such as Russia, USA, Australia, Korea & China.

You can find us performing again at the end of the year at Solas for a fun and cheeky X’mas production.