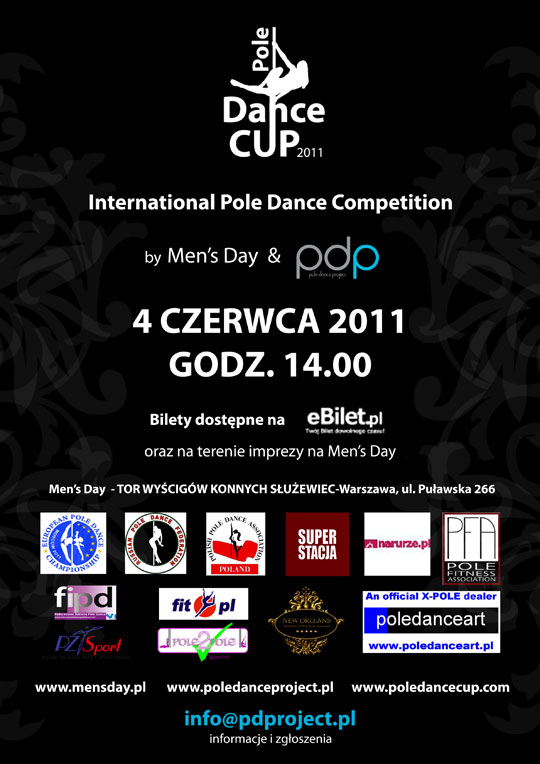 The Pole Dance Cup is an international pole dance competition which is organized by Pole Dance Project and (this year) is co-organized by Men’s Day. The first ever Poland Pole Dance Competition was also organized during Men’s Day in 2010. It met with huge interest and warm greetings among viewers and all press and other media.

From May 2010 a lot has changed – Poland has become more open regarding a new form of dance/fitness – pole dance. The media now mention pole dance more often and in April 2011, The Polish Pole Dance Association organized its first National Pole Dance Tournament under patronage of PFA (Pole Fitness Association). The organizers of this competition took it one step further – they decided to create the International Pole Dance Competition – Pole Dance Cup, which is the first ever Polish pole dance competition. They contacted many international pole dance organizations, magazines, etc. to achieve the best possible outcome, to act in accordance to international standards and to let the world know that “Poland has started Pole Dancing!”

The complete list of all sponsors and patrons, rules of Pole Dance Cup and other significant information will be available at www.mensday.pl, www.poledancecup.com, www.poledanceproject.pl and on the Facebook pages of the organizers (Pole Dance Project, Men’s Day).

To gain more information or to apply for the Pole Dance Cup you can write to: info@pdproject.pl or natalia@pdproject.pl.

It is with great pleasure to inform you that during Pole Dance Cup (during the breaks for Jury deliberation) we will be able to take part in the debut of some very fine artists – Ola Karry (vocals) and Tomasz Grabski (saxophone) – artists cooperating with the Pole Dance Project.