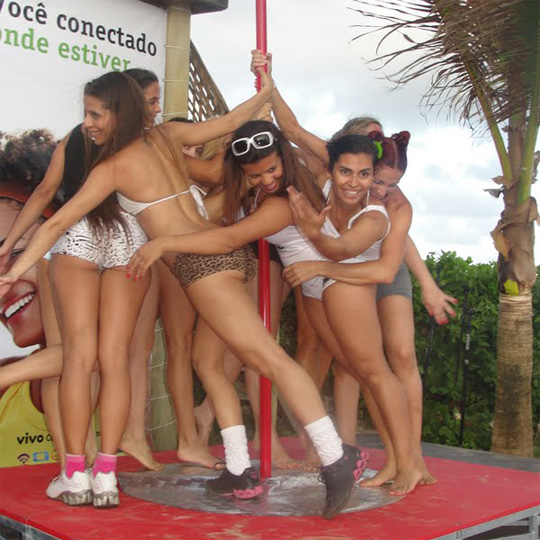 Pole Dance Academy of Bahia held the first ever major pole dancing event to have been held in Brazil, which covered the national newspaper and TV station in Bahia.

This event happened some time ago and it is only now that the newspaper and TV station in Bahia have passed the photos and allowed them to be published, and only now have I found the time to spread the word about the event which happened between the 28th to the 31st January 2009. This event was organized by me, Klaudhya Souza; I am a pole dance teacher and the owner of my own pole dance school called Pole Dance Academy of Bahia (APDB). The event was a mix of acrobatics, artistic fitness of pole dance and street dance.

Present at this event in Bahia were 10 experts in teaching pole dance fitness and the fine art, from various locations around Brazil: Souza Kláudhya (Salvador-BA), Grazzy Brugnner (Curitiba-PR), Cristina Longhi (São Paulo-SP), Flavia Rodrigues (Rio de Janeiro-RJ), Fab Monica (Sao Jose do Rio Preto-SP), Cris Ghislandi (Salvador-BA), Karolina Mota (Fortaleza-CE), Deborah Luiza (Curitiba-PR), Mari Silva (Sao Paulo) and Esther Chiamenti (Capanema-PR). The 10 teachers all gathered to make this event happen and help it to be one of the greatest events ever to have happened for pole dance in Brazil.

On the 1st day (28th January) there was the ‘Pole Circuit Street Carnival’. This was where all the teachers toured on the circuit with the carnival, performing any acrobatic pole dancing moves on signposts, railings, pipes, etc. The 2nd day of the event was held in a tent and was called ‘Beach Pole Blonde’. It took place on the beautiful beach of Hallelujah with scenery which was also being complimented by the beauty and the art of pole dancing. The 3rd day of the event was the inauguration cocktail party at the Pole Dance Academy of Bahia, at the Modern Gym, which is futuristic and highly structured for the proper practice of the activity of pole dancing.

Several presentations where held at the cocktail party, plus a raffle which included prizes.
There were also discounts on physical activities, travel handbags with APDB and many other gifts.

The last day was ‘World Youth Day’. In the morning free pole dancing classes were held and open to the public, which were also provided by the art pole dancing teachers from the Pole Dance in Brazil Studio.

The afternoon finished the events with a flourish of pole dancing around the streets and the old town of the historic center of Salvador (Pelourinho, Elevador Lacerda, Mercado Modelo, Castro Alves square, etc.).

The event attracted TV coverage from Aratu (SBT) plus the newspaper Correio da Bahia, which served as a form of prejudice and misconception about the practice of pole dance. However, it also showed that while art performance and fitness is a physical activity that works various muscle groups (arms, thighs, buttocks, abdomen, etc.), it also requires strength, endurance, flexibility, determination, skill and concentration of the teacher and the student and is the sport for the athlete. Thanks to all the teachers, students, assistants, photographers, journalists and audience who made this one of the biggest events of pole dance ever to have been held in Brazil.