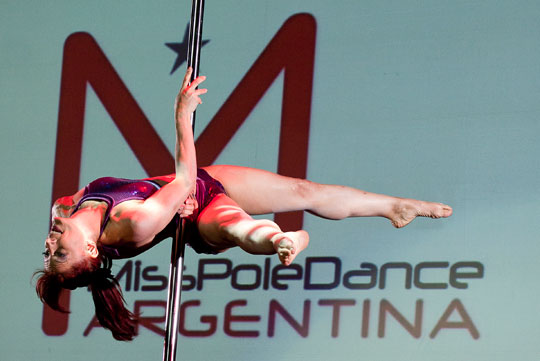 Viviana Morales is the winner of this year’s Miss Pole Dance Argentina Championship and now moves forward to represent Argentina at the 2011 World Pole and Sport Fitness Championship in Budapest, Hungary.

The third Argentinean tournament and the second South American contest were held on Saturday 6th November 2010 at the Astral Theatre. More than 600 people attended the event to see over 30 dancers from Argentina, Brazil, Peru, Venezuela and Colombia that showed their abilities with the sport of pole dance. Argentinean born Viviana Morales, aged 47, also obtained the Miss Pole Dance South America third place.

Elizabeth Muñoz from Peru won the South American competition and will now represent her country in the 2011 World Championship. Second place winner was Regina Mutai from Brazil.

This was a first time with the use of an online computing system, which was used to qualify contestants with the event live on the Internet.

More information on the events can be seen online at: www.misspoledance.com.ar
www.artdancestudio.com.ar