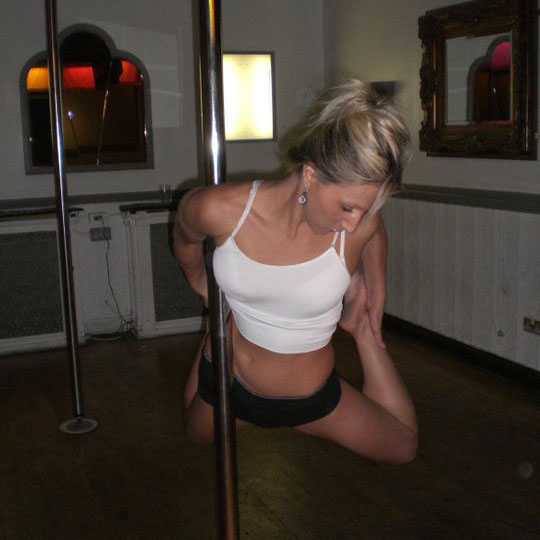 In February 2010, I overheard two friends talking about pole dancing; I was intrigued to learn more. On asking them about what they knew and finding that this could be something I would be interested in, I searched the internet and came across some clips from Youtube. I was amazed at what I saw, so I searched for my local school and discovered Pole2Pole (which I applied for straight away). After enjoying my first lesson I booked myself in for the following week. This was the right decision as I have since then continued with my lessons and I am happy to say that I have met the nicest group of girls.

After being a Pole2Pole student for only 3 months I decided I wanted to enter into the Essex Pole Dancing Competition being held in November 2010. On becoming a regular student, I was asked if I would like to help out at a competition being held in July, at Taylors Retreat Studios. I was going to be a pole cleaner and I was so happy to be chosen. This was also a great opportunity for me to see how a competition was structured. After an amazing night I was certain that this was what I wanted to do. I then headed back to the hotel for an early night, to prepare for the master class the following day being taught by Hanka Veneslaar.

In October 2010 I was lucky enough to be asked to appear in a music video. J-Harden had flown in from America to shoot scenes in and around London for his new song ‘Work Dat Pole’. Myself and five other girls from class had also been asked to perform live with J-Harden (King of Hood and Blues), as backing dancers to close the European and British Isles Pole Dance Competitions 2010. I was having the time of my life; I loved every moment of the recording, performances and being on stage. This was where I wanted to be.

The performances were over and things started going back to normal, so I decided to get started on my routine for the Essex In-house Competition. Also entering was a friend from class, Alex. We put together a ‘Pole time table’, which we followed every week without fail and we would meet at my house for pole practice. Neither of us had ever put a routine together, so we chose our songs and did a brainstorm of moves we wanted to use. When we had finally completed our routines we were much happier with ourselves. Practise, practise, practise was all we did for the next 4 weeks (as well as hair and make-up nights). After making my outfit and practising my routine until it was picture perfect in my mind, I was all set. I didn’t feel one little bit nervous. ‘Is this normal?’ I asked myself…until the nerves kicked in on the 27th of November, the morning of the competition.

I was physically sick, I couldn’t eat a thing, I was a nervous wreck. I arrived at the venue; the poles were up and I could see that the other competitors were in the dressing room. I couldn’t believe that this was really happening. I saw Alex so I rushed over; it was at this point it became a reality. I was called, along with the others, to select an envelope that would indicate the order of appearance in the competition. I opened my envelope – I was first! ‘However am I going to cope?’ I worried. I then spoke to the event organiser, and luckily for me the rules allowed me to swap my running order with another competitor, so I ended up performing 5th.

All contestants had performed and later we were called back on stage for awards. After 3rd and 2nd places were announced I was kicking myself, thinking I should have worked harder because I didn’t believe I could have done any better than 2nd or 3rd. To my amazement I heard my name being called in 1st place. ‘Oh my god, I’ve won!’ I thought. I had won the Essex In-House Pole Dancing Competition 2010 and I had never been more proud of myself. Part of my prize was free entry into the British Isles 2011. I’m looking forward to competing next year.

The next day I woke up and the news of my win still hadn’t sunk in. I was off to have a 6 hour master class with Sally-Anne Giles which was amazing, as I’m now closer to perfecting Chinese flag. I would just like to thank Pole2Pole, my teachers, family and friends. I couldn’t have done it without out you all.