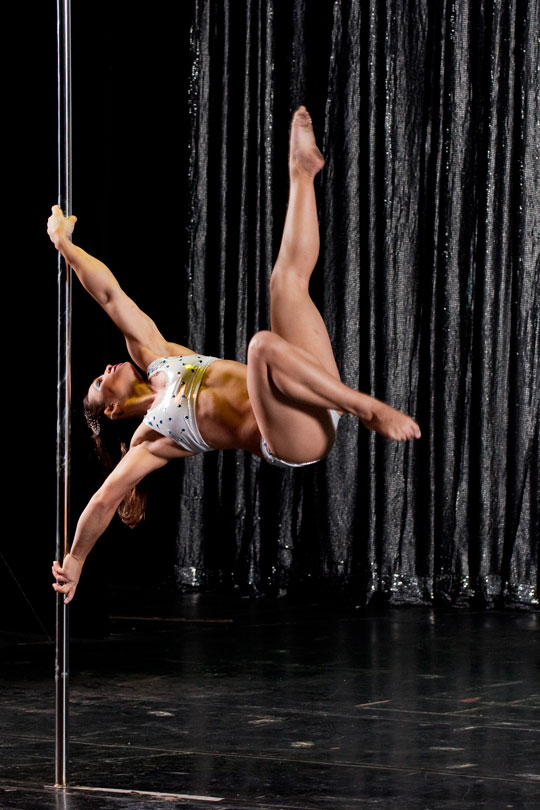 Here is another great interview from the archives. This was published back in our September 2010 issue, so for those who never got to read it, here it is…

How did you find Pole Dance?  Or did it find YOU?

Well, it found me! Sort of. I was a circus performer so I was always looking for something new in the net, that’s when I found a video of the Miss Pole Dance Australia competition, with Felix performing. I loved it! I had never before seen Pole Dancing as an art/sport, and that really opened up my eyes and mind. I wanted to do it so bad, but it was not easy to find a teacher.

So, how did you start?

I saw the video near the end of 2008, and only found a teacher in May 2009. Her Name is Sarita Papalardo, and she turned out to be the best teacher in the world for me. She was very good at the sexy dancing part (which I totally knew nothing about). But now she has moved to another city, and Cristina Longhi was kind enough to let me practice in her studio.

How did you think and feel back then, being a newbie?

Pretty stupid! And in a lot of pain. I have always been very strong so I could do the moves very fast, but my skin was not used to all the pressure and friction the pole causes, so it hurt me badly.

I still feel like a newbie, since in May 2009 I will complete only one year of pole dancing. All the girls I know have been pole dancing for at least 2 years. But now it hurts less.

Where/who do you get your inspiration from?

Everywhere, everyone I have done almost every sport/dance in the world, and I have lived in three different countries, and I think this mixture of experiences and cultures is very interesting. I try to do the same with my style of pole dancing.

Describe your dancing style in one sentence.

Still working on this…

What training regimes/Diets do you have?

Since I started Pole dancing I lost about 8 kilos without even trying. Now that things are getting serious, I have a professional nutritionist who is responsible for my diet. I train for about 2 hours a day, 4 days a week on the pole, and another hour and a half in the gym, to keep up shape and conditioning.

Here in Brazil it became more popular as a sport/art after I won the South American championship in October 2009. Before that, it was seen more as a stripper’s dance, so the media never gave it much attention. I love the fact that people now watch us and respect our art.

What are your favourite moves?

How long did it take you to nail those?

The handspring was one of the first moves I ever did. It was easy for me, because I had strength and I didn’t hurt the sink! The spatchcock took me about 4 months of pole practice to do it stepping onto the pole, and another month to do it from the scorpion.

Who are your favourite dancers out there now?

What competitions have you entered? Or won?

What are your future plans for pole dance?

Right now I’m really focused on the World Championship. I don’t need to win, but I need to do my best.

Do you have any upcoming events?

Well I have many parties and nightclubs to perform around here, and in September we will have the Miss Pole Dance Brazil 2010 which I will be performing, not competing.

For those who are beginning, one day the pain in your skin is going to stop!