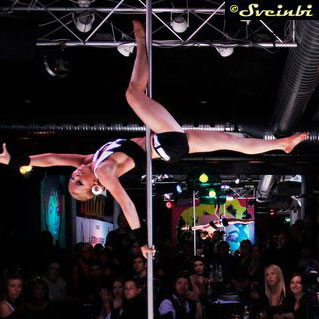 Pole fitness Iceland Pole Dancing Championship 2010 called pole dancers from all over Iceland to compete in the professional category. 10 top Icelandic contenders competed for the title which was filmed by the biggest sport TV station in Iceland and was aired in October.

The organizers of the competition followed all the European pole dance rules and regulations and the winner of this competition, Sólveig Steinunn Pálsdóttir, was very excited to discover that she had won her place in The European Pole Dance Champion 2010 pole dance competition, which is being held on Friday 15th October 2010 in England.

Sólveig Steinunn Pálsdóttir, at only 20 years old, is not only the winner of her first pole dancing competition, Iceland Pole Dancing Champion 2010, but she is now recognised in Europe and is an up and coming Star of the Pole Dancing world.