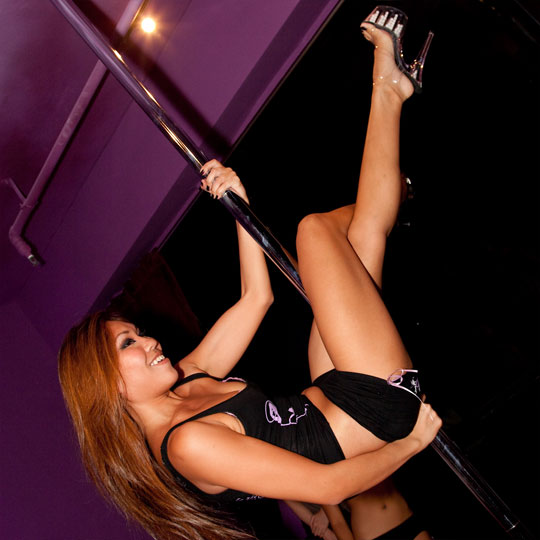 A great article taken from the January 2010 issue of Pole2Pole Magazine. A paradise party in Hong Kong which covered a fantastic night of performances.

There was a great deal of tension leading up to what turned out to be a fantastic night of performances, food and meeting new people.  There was an abundance of diversity in the group, many students that have stayed faithful to Symone and her unique and effective teaching methods.  Even still these students made up a small fraction of the attendees.  There were people at the party that had absolutely no idea what pole dancing was, and eager to see.  Still again there were more people who had come to see Pole Paradise, the performances and the most unique dance studio in Hong Kong.

It was a long road for Symone to create her studio from nothing.  Negotiation after negotiation lead to a myriad of headaches when looking for a suitable location, but a strong desire for perfection drove her on.  An incomplete building offered the solution to the ever-expanding problem of finding space in this crowded city.

The day came, nothing too notable to distinguish it from any other, with the exception of butterflies in the stomach.  Last minute preparations began early at the studio, cleaning, straightening receiving flowers and last minute choreography touch-ups.  The party was scheduled to begin at 19:00; sure enough the first guests arrived promptly on time.   Nearly all of the guests arriving commented positively in turn about the “mangosteen” (plum-like) color of the walls.  Which contrasted ever so nicely with the maple wood floor.  As the eyes of the guests rise along the walls they immediately notice the eight-foot tall wall of windows, elegantly draped with deep purple silky shades.  Tantalizingly transparent, but not to worry on the 10th floor there aren’t likely to be any staring from outside.  The oohs and aahs continue as people notice that, two of the other three walls are covered with mirrors.  These eight-foot mirrors consume the walls giving you the sense you’re in a much larger studio.  Then the eyes catch the poles, shining chrome pillars taunting all who draw near to touch.  They follow the seemingly endless eleven-foot poles.  Having thought there was no more to see, they notice the gorgeous tropical paradise inspired sunset hand-painted on the ceiling.

The food was plentiful, at least for the expected number of guests, but it was eagerly consumed remarkably fast.  The wine flowed and people mingled.  This went on for about an hour.  It was a really fantastic atmosphere; all the guests seemed to ‘gel’ quite well together.  Some of our guests that evening were men, and not just there to be accompaniments for their respective lady friends, most quite genuinely interested in becoming a part of the pole dance community.  Most every one of them was aware of the incredible upper body and core workout benefits.  The ones, who were not aware, were told.  They tried a couple of simple beginner moves and were also convinced.  That was just the beginning of most conversations.  Of course the hot topic of the evening were the performances by Symone, owner/operator of Pole Paradise Studio, and her two extremely talented former students turned instructors, Amy and Rebecca.

A break in the activities came with Symone’s voice announcing the up coming performances.  The order of the night was to be; Symone performing some seriously gravity defying moves, poses and spins on the pole.  Then would be Amy, also doing a performance on the pole.  Amy has been involved with pole dancing for several years and her performance showed it.  Performing in a room, where space at this point was at a premium, and with an injured back she still managed to maintain the “all-eyes-on-you” performance quality to be expected from a P.P.S. instructor.  When the pole performances from Symone and Amy were completed, it was time for a hoop performance.  This was certainly one of the highlights of the evening, and what most of the gentleman visitors seemed most keen about.  Generally it is because the hoop can be made very masculine with very little effort, it is still the same great upper bodywork out as pole dancing.  After a quick costume change Symone emerges a few minutes later, covered in her new Pole Paradise Studio work out gear.  All evening people had been admiring the steel hoop that hung a few inches above the tallest people’s heads, “I wonder what this is used for?” seemed the question of the evening.  Well we were all about to find out, Symone reached up and grabbed the bottom of the steel ring and in one graceful motion she was aloft.  She made everything look so easy and smooth, as she tends to do in all the performances I’ve seen her in.  From that performance everyone’s attention was brought back to the pole where Rebecca gracefully maneuvered around the pole. Rebecca showed real professionalism and took to the pole like a fish to water so it was only natural that Rebecca would be asked to teach alongside Symone and Amy. Many friends came to cheer her on and you could tell that from the audience’s reactions that Rebecca was a pole force to be reckoned with. Lastly with yet another change of costume Symone dazzled the crowd with a simple yet beautiful demonstration on the silks. Again people were entertained to say the least.

The night ended in a lucky draw prize with people winning prizes such as free classes for all 3 disciplines and even winning P.P.S. clothing from tank tops, shorts and even sports bras. It seemed that the night had ended all to quickly in all the fun we were having but for those who stayed behind to mingle and chat the party eventually moved onto a nightclub venue, one of a few places that have poles in Hong Kong. Hopefully with the help of Symone’s studio there will be many more clubs installing poles and maybe even have aerial performances in the near future creating a real paradise for not just pole but all artistic disciplines.