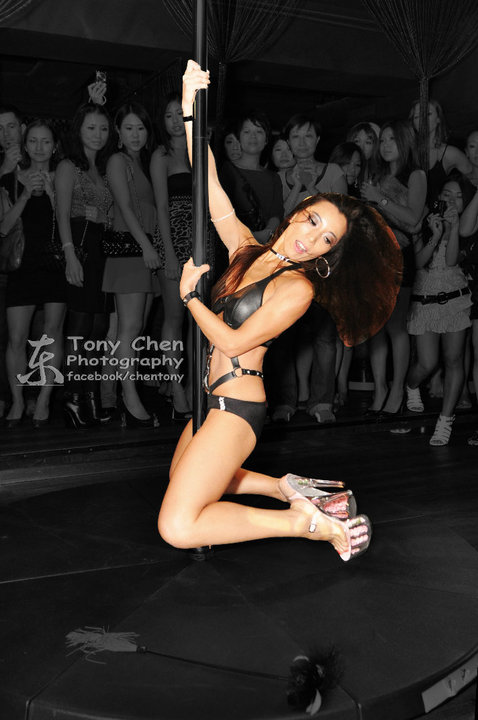 Anyone who has pole dancing friends in Hong Kong has probably caught glimpses of photos or videos from the fantastic showcase last Saturday at LaKage. The night was dominated with performances ranging from sugary sweet hoop displays to throbbing hot pole climbs. The venue’s large space accommodated an excited and screaming audience, while Pole Paradise Studio’s founder Symone Dolai expertly orchestrated the line-up of the evening. Don’t have any pole dancer friends AND missed the show? (Shame on you!) Here are some winning highlights from the night:

Society has a long way to go before judgment about the aerial disciplines is no longer passed. Luckily for Hong Kongers, Jose Dolai proved that performing on the hoop with flair is no easy feat as he churned out a crowd-pleasing act, complete with a Nacho Libre-inspired costume and upside-down stunts. Prudence blended caped mystery with blue allure into her pole routine and wowed the judges for Best Costume. Tiffany rocked a rebellious and edgy persona by incorporating high-octane stunts with sex appeal on the pole. And finally, DinDin inspired everyone in the crowd that night with her championship hoop rendition of the Mario Bros. as we all witnessed the perfect balance of aerial skill, creativity and delightful choreography. Congratulations to all the winners, and a job well done to all the talented participants of Hong Kong’s 1st Aerial Championships!

There is no doubt the crowd was thoroughly impressed during and after the event, and who wouldn’t be? It takes courage to be on stage, not to mention a practiced routine, but everyone has to start somewhere. If you are curious about what it takes to perform, compete, or just want to try out some of the moves from the competition, Pole Paradise Studio will be holding another one of their popular “Paradise Taster” workshops on Saturday the 30th of October from 3-5 p.m. Who knows? Maybe we’ll see YOU on stage next year.

By Amy Liu (Featured in December 2010 issue of Pole2Pole Magazine)