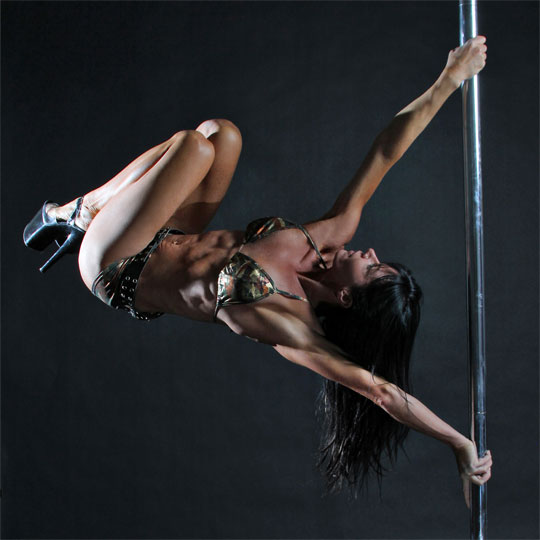 Caterina Gennaro is the owner of Poleates Pole Dance Studio in California, she is a former Ford model and competitive gymnast and has competed at many international events such as Pole-A-Polooza 2008 in Las Vegas and U.S.P.D.F Championships 2009 & 2010 in New York. She has also recently won the US Nationals 2010 in Los Angeles.

Cat – as she likes to be called – will be making a 10 day tour around the UK & Europe, holding pole dancing workshops starting from Saturday 23rd April 2011 up until Sunday 1st May 2011. Cat is ranked one of the best pole dancers in the world and says that pole dancing has put her in the best shape of her life. She wants to now share this with other women and show them how to transform their bodies, improve their self-confidence and ultimately change their lives for the better. She also wants to show how pole dancing competitions can keep you in shape and are a fantastic way to promote the sport that Cat is so passionate about.

After a career in gymnastics that took her to the junior Olympic team by age of 12, Cat obtained a modeling contract with Ford in New York at the age of 16. She also modelled for the Elite agency. Her love of nature drew her to Hawaii where she worked on dive boats and became a boat captain, rescue diver, underwater naturalist and filmmaker/photographer. She later became an animal handler working with chimps, lions and tigers. In 2000, while filming in Zimbabwe she was nearly killed as she stumbled across 2 large male lions! Cat has been recently featured in Shark Diver Magazine in a 2010 cover story for “Six Gills”, along with numerous other features including Ladies Home Journal, Direct TV Access Magazine, Scuba Diving Magazine, Forbes, Pole2Pole Magazine, Sports Illustrates On-line, The New York Times, Popular Photography, National Geographic, Oceans Conservancy TV Commercial, and in addition has given interviews to newspapers around the world including The New York Times, and many more. She also co-wrote and provided photos for “Field Guide to The Great White Shark” in 2004 along with many other publications. In addition, she has the distinction of being a pioneer and one of the most accomplished in two very unique fields: Shark Diving; Filming/Photographing and Pole Dancing! Cat continues to work in both fields.

Anyone wishing to join any of Caterina Gennaro workshops or other events (women only), please email: info@brettdev_pole2pole.com.

There aren’t many shark-diving, pole dancing girls out there!

For a full list of Cat’s workshops please check out the facebook page for the event at: