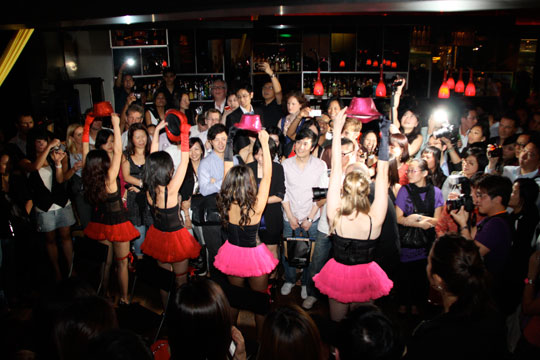 This production should not have been missed! An enthusiastic crowd gathered around the stage to listen and watch the best up-beat Broadway musicals performed through various disciplines such as pole dancing, aerial hoop, aerial silks, burlesque and chair dancing. There’s no doubt you recognized, danced and maybe even sang along to the famous numbers from Grease, Mamma Mia and Chicago while being enthralled by the performances.

Included in the line up were all the Pole Paradise Studio instructors including Symone Salamon and Hong Kong pole dancing champion Melody Rose who performed a special set on a spinning pole! Talented students of the studio also took part in the performances and were eager to showcase the moves they had learned over the past months.

The crowds responded fervently, especially during the lucky draw giveaway when many fortunate audience members won a variety of classes and workshops.

We are already thinking about new ideas for the next show, and to put you on the track, all participants will have a chance to show their skills to their friends, but shhhhh…