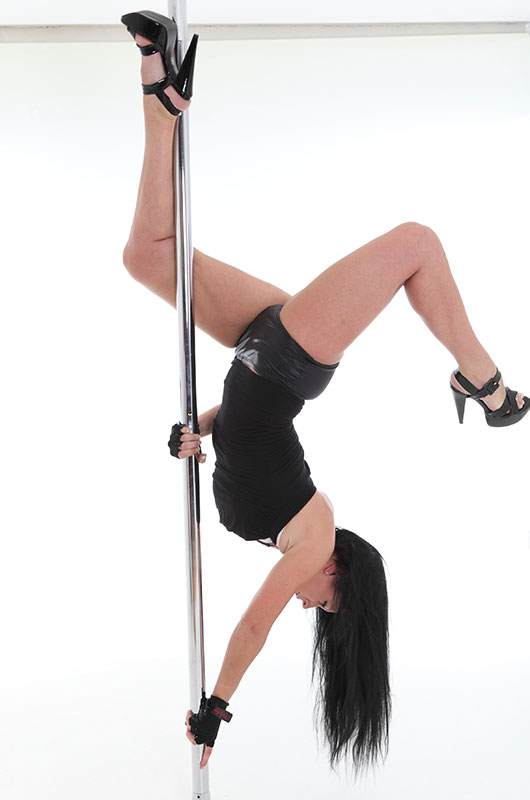 From students: Nicola Stokes and Adrienne McGurn have been learning and perfecting their pole skills since 2008/2009. Originally, the duo both joined Dance Inspires as students in order to take up what was at that stage (and still is) the latest craze in keeping fit and having fun.

Adrienne joined the school as a student in 2008, had a background of ballet, and gymnastics and felt that pole would complement her skills. Intrigued by the glamorous dancing side of pole, Adrienne soon fell in love with the pole art.

“I wasn’t aware of the complexity of pole and the vast number of spins and inverts – I really had no idea what was involved but was highly impressed after my first class and nothing has stopped me poling since. I remember learning my first spin being the ‘Fireman Spin’ and how I initially found it whilst the instructor made it look easy”

Outside of pole, Adrienne also enjoys Karate, horse riding and even more so Burlesque. “I love it! Love the costumes, the routines, the shows and being part of Oxford Scrumpets and joining up with the Cream Tease Troop”.

Adrienne has performed Burlesque as part of a troop at the Benevolent Fund event in May 2012 alongside pole routines. She is really pleased that Dance Inspires now offers this form of dance alongside pole lessons.

Nicola was introduced into to the world of pole in her university years in 2004 when the School was originally founded. Although knowing about pole, Nicola decided not to join in on the latest craze at the time due to health issues. However, she picked up the sport during 2009 and quickly realised the benefits of joining Dance Inspires, established as what is now known as Oxford’s first and finest pole dance school.

“I sometimes kick myself for not starting pole sooner when Dance Inspires was created. I was so naïve to think that pole would not be good for me! Not only did it build my confidence but I also gained lots of new friends – it was like gaining another family! I struggled with anorexia for most of my younger and teen years which dented my confidence, but once I found pole at Dance Inspires, not only did I realise that it helped me to find my confidence, but was also a supporting factor in helping to combat the anorexia that I was suffering with.”

To teachers: Adrienne, is a Level 4 Certified Dancer and 3 Star approved instructor began teaching at Dance Inspires in 2010 and quickly realised the benefits of teaching others.

“Teaching pole has opened me up and given me further confidence in myself and my abilities.”

“My favourite feeling is watching my students putting their routines together after learning some new moves. It’s almost a tear moment when they include a move in a routine that they were either scared of or struggled with whilst learning.”

Nicola began assisting instructors during 2010 and not long after that became a fully-fledged Dance Inspires instructor.

Nicola, a now a Level 5 Certified Dancer and 3 star approved instructor wanted to find a sport that would not only keep her fit but that would also allow her to meet new friends and gain confidence.

“Not only did pole give me confidence in myself but more importantly I learned how to teach others to do the same. It gives me so much joy to see students with little confidence grow in to strong woman due to the sport.”

Nicola who enjoys teaching students of all abilities is keen to ensure that each of her students reaches their maximum potential, whether that be in the world of competing or just generally improving on moves they want to conquer.

The girls recently started their journeys into the world of competing. Both ladies took part in the Oxford heat of the Pole2Pole Professional Cup in May 2012. Nicola came first in the heat and Adrienne second showing that their years of experience of teaching, doing master classes and continually training, has benefited their dance and performance skills!

During the final of the Pole2Pole Professional Cup 2012, Nicola achieved second place at the event, of which she was very proud of.

“At the risk of sounding cliché, it really was a dream come true and I never thought I would get a place, let alone 2nd! I thought that without being a gymnast or ballerina that I did not have a chance of placing… now I know otherwise and encourage my students who like myself do not have much dancing skills that anything is possible”.

To owners: The ladies love for pole and for Dance Inspires has recently blossomed into a new partnership. As of 1st February 2013, Adrienne and Nicola became the proud new owners of Dance Inspires and hope to continue on the hard work achieved at the school.

On reflection from students to owners, the girls are thrilled to be taking on a new venture that will benefit many students for many, many, years to come!

The girls are also looking forward to hosting their first In-House competition on 6th April 2013 and to hosting the Amateur and Professional Pole2Pole Cup Oxford heats on 1st June 2013.

The girls are also volunteering as pole cleaners at the 2013 WSPF (World Pole Sports Federation).

“We are really looking forward to being part of the WSPF event that is paving the way for the future standards within the pole industry as well as seeing competitors achieve their dreams.”